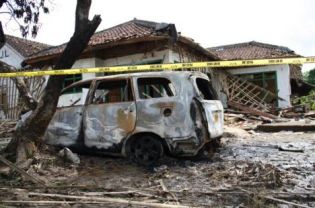 Only a handful of those involved in the attack on a small Ahmadiyah community in Cikeusik, Banten, were charged, and they only received prison sentences of just a few months. An Ahmadi survivor who almost had his hand hacked off, though, was charged with provoking the attack and sentenced to six months in prison, half a month longer than his attacker. (JG Photo)

The year 2011 has been yet another period of abject failure by the government to protect human rights, according to the results of a survey released on Monday.

Bonar Tigor Naipospos, deputy chairman of the Setara Institute for Peace and Democracy, said the survey of leading rights activists, community and religious leaders and bureaucrats showed no improvement in the state’s efforts to protect rights.

“There has been no significant change or effort from the government to uphold human rights compared to the previous year,” he said.

“The survey used a similar approach as last year. The Setara Institute grouped the variables in eight categories and measured how these items were perceived by our 71 respondents.”

Bonar said the category respondents rated the lowest was the resolution of past human rights violations, which received a score of 1.4 on a scale from 0 to 7. Last year’s worst-performing category, the perception of religious freedom, improved from a score of 1.0 to 2.3, while elimination of discrimination dropped from 4.0 to 2.8.

“Even though the score for religious freedom improved, one item in that group that still received a low score was the handling of cases of violence against minority groups,” said Ismail Hasani, a researcher at the Setara Institute.

He said that this year the worst of those incidents was the attack by a mob of 1,500 on a small Ahmadiyah community in Cikeusik, Banten province. That attack, in February, led to the deaths of three members of the beleaguered sect.

Only a handful of the perpetrators were charged, and wound up receiving prison sentences of just a few months. An Ahmadi survivor who almost had his hand hacked off, though, was charged with provoking the attack and sentenced to six months in prison, half a month longer than his attacker.

“Compared to previous presidents, Yudhoyono has the strongest political backing because he was directly elected by the people,” he added.

“So there’s no excuse for him for not to uphold human rights.”

“Komnas Perempuan received the highest score, with a 3.7, while the KPAI got 3.6 and Komnas HAM got 3.4,” Ismail said.

“Another government initiative that received a higher score was terrorism eradication.”

The survey questioned 71 respondents across 13 provinces in the country. It was carried out in September and October and focused on items in international covenants on human rights.