A minority Muslim sect says it still faces persecution from extremists but has praised efforts to stamp out discrimination in south London.

A year ago, this newspaper exclusively revealed shocking examples of Ahmadiyya Muslims, whose main mosque is in Morden, being openly insulted and discriminated by religious bigots who targeted their livelihoods and even their political candidates. 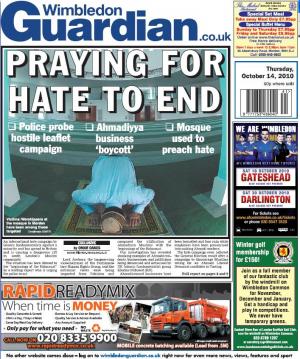 How we reported the story one year ago

The Ahmadiyya religion does not believe, as most Muslims do, that the prophet Mohammed was the last messenger of Allah – a theological difference so serious it led to Ahmadis declared as non-Muslim heretics in Pakistan.

Last year, 93 Ahmadi worshippers were slaughtered by terrorists while they prayed in mosques in Lahore. One of the victims was Muhammad Ashraf Bilal, a visiting businessman who lived in Sispara Gardens, Southfields.

Since our exposure of the plight of Ahmadiyya Muslims around the world, an All-Party Parliamentary Group was set up and chaired by Mitcham and Morden’s MP, Siobhain McDonagh. Wimbledon MP Stephen Hammond is the group’s vice-chairman.

Ms McDonagh said: “I’m sure that without the hard work of the local Guardian in bringing this issue to light, this group may not even have come together to do the important work it does.

“Not only have we had meetings in Parliament, but in the European Parliament too. We’ve met with Ofcom to talk about the censorship of religious broadcasts which promote violence, and we’ve discussed the issues with Foreign Office Minister, Alistair Burt.”

Trouble in Tooting started with conference

The evidence pointed specifically to the Tooting Islamic Centre, where its imam, Suliman Gani, had invited hardline clerics in March 2010 to speak about the danger of the Ahmadiyya Muslim religion spreading in the face of mainstream.

The clerics included Abdur Rehman Bawa from the Khatme Nabuwwat, a organisation will claims to “provide awareness” about the Ahmadiyya religion. At the conference, Mr Bawa urged worshippers not to do business with Ahmadis.

Following that conference, Mr Gani admitted he had pleaded with a halal meat shop owner not to sell his business to an Ahmadi because he believed Ahmadis could not be trusted to sell legitimate halal meat.

There were also leaflets entitled “Deception of the Qadiani” found in Tooting and an Ahmadi butcher won an employment tribunal case in which he was found to have been sacked because he would not renounce his religion.

The Crown Prosecution Service came under criticism from Parliament’s Human Rights Group for not prosecuting the allegations under hate crime laws and its vice-chairman, Eric Lord Avebury, likened the evidence to “the beginnings of the Holocaust”.

Reflecting on the last year, the Wandsworth police officer who investigated the case said he had not received any new allegations about anti-Ahmadiyya material being displayed or distributed in Tooting or elsewhere.

Chief Inspector Tim Harding said: “We continue to maintain good communications with all our Islamic communities and we urge them to inform us of any issues that causes them concern and our local safer neighbourhood teams provides day to day contact with them.

“Previous allegations and investigations have not identified evidence that may lead to any potential arrest of suspects.”

Sadiq Khan: “Pleased we have moved on”

Tooting’s MP, Sadiq Khan, also came under criticism from his political rivals after they were threatened with violence during last year’s general election campaign.

Mr Khan won the seat with a small majority of 2,524 after fierce opposition from Conservative candidate Mark Clarke, but it was Liberal Democrat candidate Nasser Butt – an Ahmadi – whose presence at the Tooting Islamic Centre angered hardliners.

On April 14, 2010, the hustings turned into a dangerous farce when Mr Clarke, who is mixed-race, had to be locked into a room for his own safety after he was mistaken for Mr Butt by thugs.

Mr Butt, who was due to arrive, was quickly told by telephone to stay away for his own safety.

Mr Khan, who denied any knowledge of his rivals being threatened, expressed his disappointment at discrimination happened at a mosque in which he is a regular worshipper.

This week Mr Khan, who is also Labour’s shadow justice secretary, said: “A year ago, like many local residents I was both surprised and disappointed to learn of the growing tensions within our community, as Tooting is well known for its tolerance and respect.

“I am pleased that we have moved on and hope that this period is now well and truly behind us. All local residents should feel safe in our community. We have a duty to each other to remain vigilant.”

Naseer Dean, Naseer Dean, President of the Ahmadiyya Muslim Association of London, said: “We wish to thank the local Guardian for championing and safeguarding the rights of all.

“This is the best of British reporting epitomising the British values of fairness and justice for all.

“We are grateful to the Wimbledon Guardian and Wandsworth Guardian for highlighting the plight of Ahmadi Muslims who are persecuted around the World.

“The articles highlighted the dangers facing us and others who live peacefully in the UK, but a lot more needs to be done by others to stamp out extremism in the UK.”