A community of Ahmadis living in a village in West Lombok, West Nusa Tenggara, are still fearing for their future both as workers and citizens of their country, six years after being evicted from their homes because of their religious belief. 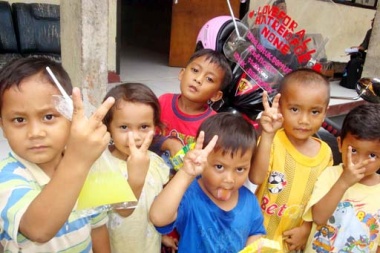 Hopeful eyes: Children pose at an Ahmadiyah shelter in Mataram, Lombok. Members of the religious community have been largely shunned by society, and their future as part of Indonesia’s workforce and as citizens is looking bleak. The 33 families of the community have lived in the shelters since they were evicted from their homes six years ago. JP/Panca Nugraha

The Ahamdiyah community comprises about 140 people and 33 families who have been forced to take shelter in Wisma Transito in Mataram after they were evicted from their homes six years ago.

The outreach program provided by the NTB provincial administration, involving the NTB Agency for Political Affairs and National Unity and a number of clerics, has not been effective, the Ahmadis say, while the West Lombok regency administration has backtracked from its promise to compensate assets they were forced to leave behind in their village.

An early estimation revealed that their assets, comprising 21 houses and land, were valued at Rp 1.4 billion (US$155,000).

“The outreach program, they said, would last for six months from June until December was in fact carried out for only two months. It began early on in the month of Ramadhan and ended just after Idul Fitri,” Nasiruddin, one of the Ahmadis, said recently when interviewed at Wisma Transito.

He is a respected member of the Ahmadiyah community, often playing the role of advisor.

Nasiruddin accused the government of not being serious about resolving their problem.

The condition of the Ahmadiyah refugees in Wisma Transito, which is located around 2 kilometers from the NTB gubernatorial office, has not improved. The community still lives in makeshift quarters made of cloth and used banners.

“I gave birth at Mataram General Hospital for free, thanks to the Delivery Assurance program, but we faced difficulties in applying for the Jamkesmas and Jamkesmasda health insurance because we don’t have identity cards,” said Maemunah, 25.

She was carrying her baby, Noval Syaif Irfan, who was born on Nov. 15, while eight pre-school-aged children were cheerfully playing around her.

Ahmadiyah is considered by mainstream Muslims as heretical. Ahmadiyah communities across the country have been persecuted by their fellow Muslims, and in some severe instances have had members seriously injured or killed.

In a number of provinces, local administrations have banned the sect citing security concerns.

Ahmadiyah members in West Lombok say they continue to be persecuted.

Amaq Marsudin, 52, who suffers from kidney failure and requires regular dialysis, was rejected by the NTB General Hospital because he did not have an identity card.

“He was admitted to the hospital for two weeks but did not receive dialysis because he is not covered by Jamkesmasda as he doesn’t have an identity card. Finally, we brought him back to Wisma Transito and he has resigned his fate to God,” Nasiruddin said.

According to Nasiruddin, during the e-ID card campaign program in Mataram in October, the Ahmadiyah refugees tried to apply for ID cards at the Mataram Population Agency.

However, they were turned down on the grounds that they were only temporary residents.

“The West Lombok regency administration also refused to issue us ID cards. Actually, we only requested residence identity permits. It doesn’t matter if we don’t live in West Lombok, but owning an ID card is important for access to healthcare and education programs, especially as an ID card proves citizenship status,” he said.

The Ahmadiyah refugees endure living at the shelter despite that most of the families are in dire financial straits. In general, the men seek a living as construction workers, ojek (motorcycle taxi) drivers, barbers and hawkers.

Sarim Ahmad, 45, for instance, owns a chicken noodle cart now. He had worked for a fritter seller earlier.

“I saved up my salary to make a cart to sell noodles, and the proceeds are not bad,” he said.

The NTB provincial administration had initially promised that the outreach program provide startup capital for the refugees.

However, for Sarin, it was all just talk and no action.

“They promised to provide startup capital, but have failed to do so as of now. Furthermore, we prefer to be independent because the assistance is a loan in nature and we have to pay installments,” he said.

West Lombok spokesman Ispan Junaedi said the administration would never compensate the assets of Ahmadiyah members in Ketapang because funds set aside for that purpose in 2010 and 2011 had not been realized “because the refugees raised the amount”.

Previous Article Blasphemy charges: Out of fear, Ahmadi family on the run
Next Article W. Java the ‘least tolerant province’